The other day I paid a visit to the ANMM Volunteers website to catch up on whatever activities were happening on line; and as usual there wasn’t much. Gone are the days when I was guiding there every week and was involved with the site.

There was one thing that grabbed my attention, there was a new display of pictures from a new guide which I found very interesting. Some pictures were of ships from the 50’s and 60’s but one in particular caught my eye.

It was an American warship which he photographed when it was here in October ’08; the USS Halsey; a destroyer! I was gobsmacked; A destroyer named for a great American Admiral; Admiral Wm. F Halsey, Jr.

Admiral Halsey known as “Bull” for obvious reasons is one of only four United States admirals to achieve the rank of ‘Fleet Admiral’ equivalent to the Royal Navy rank of ‘Admiral of the Fleet’ ; (obviously they didn’t want to appear colonial, they thought they would be by using the old enemy titles of rank). Way back in 1903 after some minor skirmish which they classified as a war (the Spanish American war) they created the rank of Admiral of the Navy for George Dewey, it was only ever used the once.

‘Bull’ Halsey though was a different kettle of fish, an American in the mould of a Nelson, when he was appointed to the aircraft carriers he was not content to be just a deck officer, he took the plunge and became a fully qualified pilot and at the age of 52 was and still is the oldest officer to get his wings.

He was flying his flag aboard the USS Enterprise at sea when the Japanese attacked Pearl Harbor and returned to port the evening after the strike. The Enterprise was also his flagship, when in company with the USS Hornet the “Doolittle Raid” on the Japanese mainland was made just a few months later. His motto? “Hit Hard; hit fast; hit often!”

A truly great sailor and Admiral.

Ronald Wilson Reagan was an actor, who went on to become the 40th President of The United States of America (hereinafter referred to as POTUS) during WWII he served in the US army and reached the rank of captain. He served in AAF as a PR Officer and whilst in the First Motion Picture Unit help produce some 400 training films for the AAF and more notably was involved in the discovery of Norma Jeane Mortenson aka Marilyn Monroe.

In the 1950’s Mr Reagan switched his allegiance from the Democratic Party to the Republican Party, probably under the influence of his wife Nancy (not the one immortalised by Frank Sinatra in song) and went on as we know to be Governor of California (you have to wonder at the Californians first Ronnie then Arnie) and then went for the big time and became POTUS.

I recall reading an interview with a head of state of a friendly country (the US does have some) who had a meeting with President Reagan in the Oval Office of The White House some years ago. This visiting head of state was an articulate man, a Rhodes scholar and he said during his interview that what surprised him was that the president used what could only be classed as cue cards. He stated that the president always referred to one of the cards before speaking or asking a question.

He was adamant regarding this and I had no reason to doubt what he was saying. It was very strange indeed; but on looking back to that time and thinking about President Reagan’s subsequent battle with Alzheimers, one starts to wonder when his symptoms first started.

It never ceases to amaze me the amount of reverence shown President Reagan and the honours bestowed upon this man and I wonder why. I think the GOP has a fine publicity department.

What disturbs me most though is the sycophantic slobbering to honour somebody out of all proportion.

Two men who both served their country, one as president, the other an officer of the highest rank in his country’s navy. Two ships named for these two men. 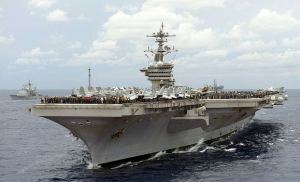 For the Fleet Admiral one of only four ever; a destroyer. The illustration is of a Nimitz class carrier (the USS Carl Vinson) and if you look closely at the picture off to the starboard quarter you’ll see a rather small ship. That is the USS Halsey! 😦

For an army captain of a film unit; an aircraft carrier. Not just any aircraft carrier but a Nimitz Class Nuclear Carrier the most powerful warships afloat. What was wrong with naming a mock up tank used for firing practice after him?

Somehow somebody got their priorities wrong. Forget the Commander in Chief thing that is ludicrous, what would this C-in-C have done if placed on the bridge of a carrier? Asked for the script?

Admiral William ‘Bull’ Halsey Jr deserves the honour President Reagan does not, if they want to name something else after him let it be a tank!.

After all it wouldn’t be the first tank named after a President, I recall training on a Grant tank many many years ago. 😉