There is one thing that I learned from Mr. Latham, how to write a decent business letter. I’d had plenty of experience in writing letters, since becoming a claims man, first at the ‘Royal, and then at the ‘Hartford’, but nothing on the scale that was expected, and required, of me at Harvey Trinders.

At those two tariff companies, the mode of writing, was usually in what Mr. Latham referred to as the passive; I/We would be obliged….; I/we should be pleased….; that type of thing.

He wanted ‘shall and will’; I shall be pleased if/to ….; we will appreciate an immediate…. you get the idea. I must admit I liked that; and as the bulk of my correspondence  was to the London office, or Hedderwicks: that was Hedderwick Fookes & Alston, Lloyds solicitors of choice in Melbourne. I thought this gave my letters the impression that I knew exactly what I was doing. Especially when writing to Hedderwicks giving instructions.

Every Friday night after shutting up shop, I’d load up a rather large attaché case with 30 or 40 claim files; well I told you it was rather a large one, close and pack up my dictation machine, making sure I had plenty of disc’s, and loaded up make my way home for a weekends work. That was every week end.

In the comments of the previous post, I was asked, very politely of course, by that very gentlemanly young chappie, Derrick, known to us all; to describe my dictation machine. I’ve excelled myself.

Thanks to the combined marvels of the Internet and Google, here’s an American ad from the 50’s or 60’s, advertising the very machine, plus a photo of the disc’s used. They were 7 inch and really floppy disc’s! 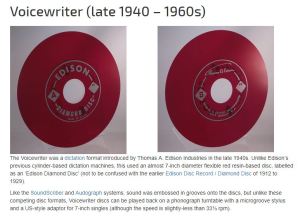 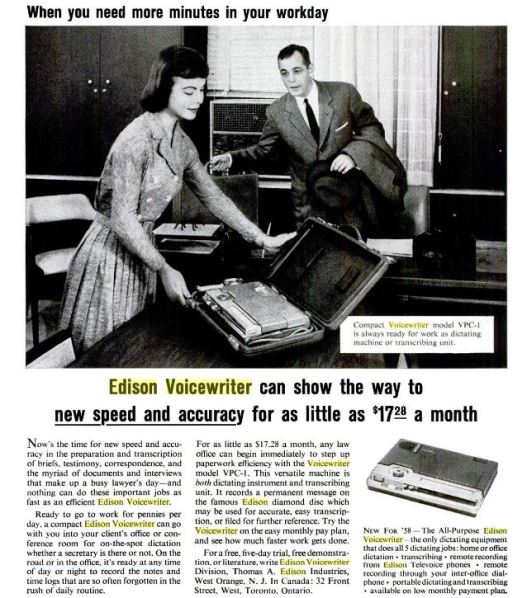 If you click the pics and enlarge them you can read how marvellous these are! Well at the time they were; at the ‘Royal’, I had one of those old time cylindrical machines, when the typist had finished typing, then had to erase what was on them, on a special shaving machine. Couldn’t find pictures of these unfortunately.

The young of today, have no idea of the joys of living in the 50’s, I’m dinkum, wouldn’t change places with anyone for love nor money.

On the last post I said I’d write a bit more about Kjell, my new offsider, a bit of a come down for him.

A jet fighter pilot in the The RNoAF (Luftforsvaret), that’s the Royal Norwegian Air Force for all you Republicans ; and democrats out there, so here’s a little to keep you going. I did meet up with Kjell in my next life/reincarnation, whatever we might decide to call it, when I finish up with the ‘Rechabite’; that’s of course if I continue blathering away to the annoyance of the War Office.

Kjell was an ex Norwegian Air force fighter pilot, and unique. How? Why?

In the 1950’s, the Royal Norwegian Air Force was one of NATO’s two air forces in Europe. They were equipped with F86 Sabre jets, and didn’t have much luck. It wasn’t the air-crafts fault, it was the pilots.

There were several fatalities. Seems that the Sabre had a tendency to flare out immediately after take off; the pilots were taught, and told, that in this event, they were to attempt a forced landing;  never  attempt to turn, and try to recover the runway.

Obviously these instructions fell on deaf ears. I can’t recall the exact number now, it was 6 or 7 pilots tried to turn, crashed and were killed.

Kjell had a flare out, and made a forced landing on deep snow; the aircraft was a write off,. He managed to get out, walk away, then collapsed with a broken back. He was the only Norwegian Air force pilot to survive a Sabre flare out, which I reckon kind of makes him unique

I knew this to be true, he had all the photo’s of his aircraft, or what was left of it, where it had torn through the snow, like giant skid marks, and his being bundled onto a stretcher. He was a good bloke and he was just filling in time joining Trinders. I suppose I should tell you why.

He enjoyed a beer too, wonder the recabite gave him a job.