Amongst all the ‘Wet’ regulars, there’s was only one of Aboriginal blood. In 1973 when I arrived at Shay the Aborigines had only been allowed to both vote and drink since 1967, and in ’73 there wasn’t that many in the workforce. I think it is pretty fair to say that most Aborigines liked it that way.

There were plenty working the ‘Stations’; that’s sheep and cattle, not railway stations; they were excellent horsemen, and top class workers with livestock. I only ever came across one, Big Sam; it was a few years earlier when I was working in Carnarvon, W.A.  and has nothing to do with this load of you know what, I did start a post about him many moons ago, and as usual never got around to finishing it!

After that little ramble, back to what I started on, the one Aborigine at Shay, was a young bloke, Black Jack; looked about 15 or 16, but probably had to be over 18 or 21 to be working on the mine, that I wouldn’t know, but he was one of my customers. He didn’t drink much, never saw him even slightly typsy, he loved to play pool and listen to the stuff coming out of the jukebox.

I never knew his real given name, I doubt anyone did, probably wouldn’t have been able to pronounce it anyway, he was always Black Jack, never just Jack. He worked on the big shovel, well they were big back in 73, each shovel bucket load grabbed 20 tons a time.

Never came in alone always with the  ‘crew’, the big P & H Shovel operator’s were the ‘elite’, in their eyes anyway, of the mine workers. And he was proud of his name!

It must have been 3 or 4 months, after I’d settled in and the ‘Wet’ was running well, that I succumbed to the persistent nagging of Chuck, and agreed to go out to the mine itself, and take a ride in his ‘truck’. The HaulPaks, huge for the time, had 9’3″ diameter tyres, and carried 120 tons ore each load, Six scoops of the Shovels bucket! Of course he insisted I go during a night shift.

On the selected night and at the appointed time. I was given the VIP treatment, collected by one of the few vehicles that were permitted, in the township, given a hard hat then driven the few miles to the mine.

It was breath taking!

I could never have imagined it, lights, action, noise. unbelievable, unforgettable, my chauffeur, used his ‘walkie talkie’ to advise that “The manager of the Wet has arrived”, No idea who he was advising, but I supposed he had to let somebody know that a non worker was on site; and I was passed onto a foreman or supervisor, might have been Robin Ruth, one who’d come into the Wet for a drink.

First up, he called Chuck, to find out how long before he could pick me up for a ride,  then showed me around this gigantic floodlit mine area, ’til up comes this gigantic truck. I’d never seen one of these HaulPaks before, just pictures. It was enormous and I was expected to clamber up the 13 steps and join my mate in his domain!

Grinning like an ape, he told me to keep my hard hat on, just to be on the safe side; think he was trying to get me worried!

Driving out to the mine head, where he’d load up, he told me how the trucks worked, I was surprised that they were all electronically driven. Each of the wheels had its own large electric motor, which was powered by  batteries, which all up, pushed this 150 ton+, fully laden truck , along at a fair old clip. I can’t recall how fast, so no point anyone asking!

Get to the mine head, join the queue of trucks waiting for the shovel to load them.. Some of the smaller dump trucks were being loaded by a Cat, which dropped about 10 tons a time as against the shovels 20.

Our turn came, and Chuck backed the truck into position, saying nothing! Not like him, but I kept quite thinking this is serious business, then

The shovel dropped it’s first 20 tons directly onto the shield that covers the cabin on these trucks.

Can anyone imagine the noise, 20 tons of iron ore makes, when dropped on a plate of metal, a couple of feet above your head?

My chum Chuck thought it hilarious! He’d orchestrated the whole episode and was going great guns on his walkie talkie, letting the whole damned mine know that I was in need of a change in underwear . Which of course I wasn’t! I did however question his parentage.

After we’d got the next 5 shovel loads, we headed for the dump where the ore was washed ,processed and stockpiled, ready for transportation to the docks at Port Hedland. Chuck then headed back quick smart for this next load, But without a passenger on his next trip, he’d dump me!

When we got back, I climbed down and was conducted over to the shovel and clambered aboard this enormous, smelly, noisy machine that had dumped 20 tons of ore onto my head!

And who was there to greet me?

Black Jack! Black Jack was part of the shovel crew, he was “The Greaser”; apparently it is essential to keep greasing the chains/ropes whatever that keeps these things working. The shovel is powered by electricity and there is a long long power cable trailing along behind it as it powers along at about 1 mile per hour, not the fastest machine.

But the thing that keeps it working and the trucks getting filled needs greasing and Black Jack did the job,

And with what did he do the job? You should all now be asking.

Why with Black Jack of course. The name of that grease, used to keep these machines working is ‘Blackjack”,  that’s why Black Jack was proud of his name!

Being Aborigine, he wasn’t a full blood, but pretty close to it I think, he had the instinct every now and then to go wandering off. He’s disappear for a few weeks and then return to the site as if nothing had happened; Goldsworthy didn’t seem to mind, they always had his job there for him when he returned.

Seems he’d go back to his people and give them all the money that he’s earned and saved and when it ran out back he’d come. He was a good lad. I liked him! I can still see his innocent smiling face!

To give you some idea of how these trucks get filled I found the picture below on the ‘net, thought it might help. The shovel depicted is not as big as the one at Shay Gap I’m not too sure about the truck, looks about 120 tonner.

I have managed to find another clip that runs about 10 minutes or so, that would have been the ideal clip to go with this load of,but I thought I’d give you a rest from the stuff I’ve been pinching from the Internet! 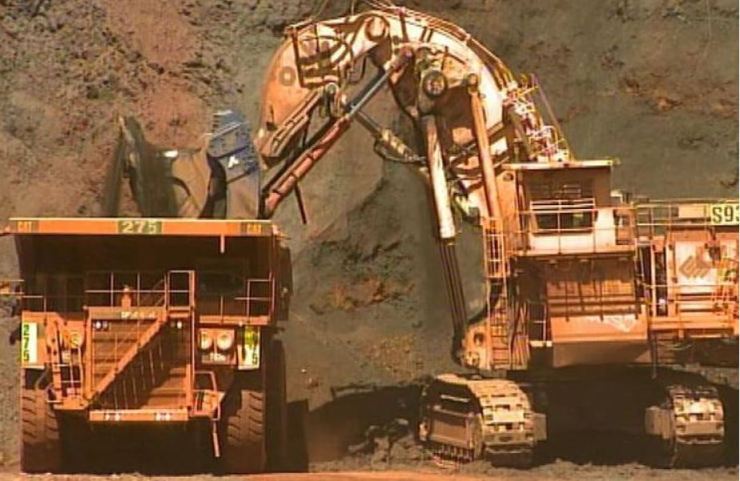 I think it’s time to wind up the Shay Gap Saga, perhaps the Christmas ’73 and my departure might make the cut, I’ll give it a bit of thought and get right back.