With four baby steers to look after, a dwelling for their comfort was needed, so the carpenter was called in, and a new home is being built. Looks pretty good so far, and I’m sure the little fellas will be quite content, I just hope it’s big enough, for when they grow up!

Somehow I can’t see Emma sending them off to market.

Another four legged friend has been  has been welcomed to the family; this time a little, abandoned, baby piggy (it’s a baby piggy not a piglet). Well actually it was dumped.

Dumped into a garbage bin would you believe, Emma passing this bin, heard the poor little thing, and rescued it and took it home. I imagine a new sty, is next on the carpenters list.

A few photo’s of work in progress on the barn, the lady that rescued the calves, gave them to Emma, with my two granddaughters, and Miss Poppy May warily watching the little piggy.

This little piggy is not going to market 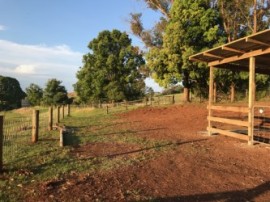 need a new home for the calves

Hope it’s big enough for when they grow up 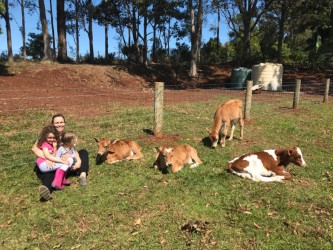 The lady who rescued the animals, and found a home with granddaughters for them

On the home front when asked what she would like for dinner the War Office said “a meat pie would make a change”, which I suppose was true, haven’t made one in a while.

Don’t ask me what’s going on here; I posted this 10 minutes ago on Sunday 14th October, but WordPress in their wisdom is showing it as being posted on the 11th October.

I’m not very happy with WordPress