Once again Emma, Luke and their two daughters, Ruby and Poppy May, dog Butch, felt the need to have a holiday. They do like holidays.

So last Sunday they went off, once again, to Byron Bay, way up north, just down from the Queensland border. The surfs supposed to be pretty good up there, and as Luke is a pretty good surfer……………

It’s a fair old hike from Annandale, around 770 km, roughly 480 miles, for those too lazy to use metric, and they usually stop off/over at Coffs Harbour,  on the way up, Coffs is a nice spot about 530 Km (330mls) from home; and I think they rest up overnight there, bit of a drag for the girls and Butch.

You can’t go to Coffs without seeing the big ‘nana, and taking the children’s picture, (even if it is on an iphone ) so here you are; 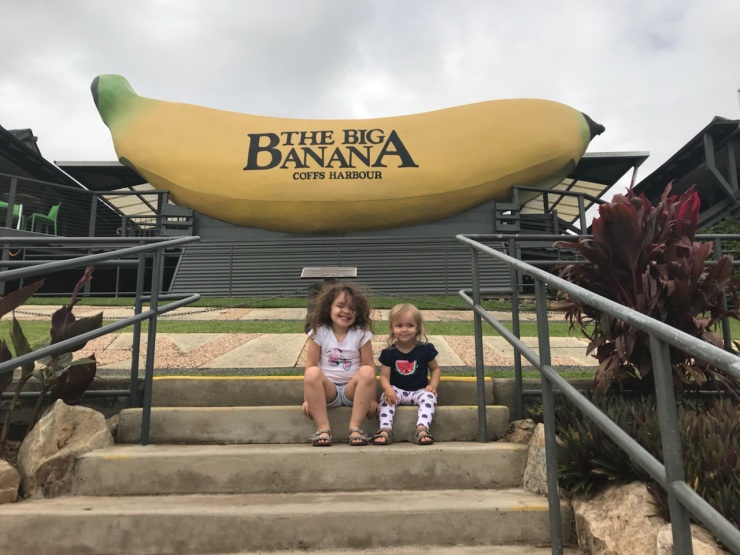 Before leaving however, the children had to say bye-bye to  nanny and grandpa;  when it came time to leave, Poppy May decided that she wasn’t going, she was going to stay with her grandpa 😀 😀 and it took some persuading  to get her to go.

She’s a determined little terror, takes after someone else I know.

If you doubt me, have a look at this blow -up of a close up of the face,  in that picture above; looks like she’s happy she went, probably forgot all about her dear ol’ grandpa by now 😥

Somewhere, amongst the great number of photographs I have, are pictures of Poppy’s mother Emma, her aunt, Sarah, uncle, Nathan; our three billy’s, taken at this very same spot, more 30 years ago. I must try and find them, I supposed what I should have done was found them and stuck them in this post, but nothing like keeping the audience in suspense, my excuse for procrastinating