A couple of weeks, or was it months ago, the War Office asked “when was the last time you had the eyes tested?” and I told her, “about 5 years ago” ! “Isn’t it about time you went again?”; in a voice that sounded like a directive to get them tested quick smart! . Feeling rather valiant at the time I answered in the negative,  replying “my eyes are fine, no problem!”.

I’ve been doing quite a bit of reading lately;  you may have noticed the dearth of entertaining rubbish emanating from these pages; then again you may not.

Well,  truth be told, it’s all Garrulous Gwen’s fault! Some months ago, she suggested a book that I might enjoy, then had the temerity to go on-line to the Leichhardt Public Library, find this book and told me to go get, read, and enjoy it! I did, and I didn’t! 👿

This photograph, from Google/Wikipedia, of The Italian Forum  was taken on a particularly busy day, you may notice.

If you look carefully there’s a couple sitting on the steps, busy, working their mobile/cell phones.

The ‘Library’ is tucked away, over behind those three big pots. Dr Ping Nee, my doctor, practices in the Medical Centre, which is at the top of those stairs; I assure you that though she practices on me, she is fully qualified and an excellent doctor.

Back to the books. The library is quite large and I’ve joined, trouble is I’ve kind of gone back to reading and neglected my website/pages whatever. Once I get my head stuck in a book I find it hard to put the ting down. I can still hear my dads voice, admonishing me    “put that bloody book down boy” whenever I’d been reading for a while, but there was always a smile in his voice, he thought it was good that I read.

Last Wednesday morning, I’d booted up, checked for email, decided not to do anything about it, and went back to the book I’d started the previous evening. A John Sandford novel, light, easy reading, always set in The Twin Cities and featuring a bloke by the name of Davenport, no, not Dudley; Lucas Davenport an ex-cop .

Fast moving, nothing too deep and easily forgotten. Which is pretty handy sometimes.

Whilst reading, I noticed that I was holding the book in a somewhat strange fashion, that I was actually peering through the bottom corners of my specs in a most odd way; so called out to te War Office “I think there’s  something wrong with my eyes!” no way was I going to admit that she may well have been right.

Shortly thereafter, she came and told me that she’d made an appointment for Friday at 1.30, (not 13.30 but 1.30) to get my eyes tested. I was then asked if I needed her to come with me; and being somewhat affronted, stated that I was quite capable of going by myself and that it would be best if she stayed and looked after Coco, who is unwell and will be going into the Annandale Animal Hospital next Monday at 08.00 hours to have an operation on his right hind leg.  😥

On Friday, I announced that I intended to do the shopping, at the Woolworth’s Supermarket, which is in the same complex as the Optometrists. I was asked if I thought I could manage that by myself. Again I was affronted! 😈 I must admit I enjoy going shopping alone; I had a shopping list of about half a dozen items, and knew I’d pretty well fill my trolley. Great fun! 😀

At 13.20 I entered the Optometrists, identified myself and told the young lady, that as I was early, I’d browse around, and have a look at the frames and try on a few pairs before the tests if that was okay. She agreed that his would be a good idea and trooped along with me.

I tried on several pairs, ( why do we call them pairs? is it because we have two eyes ?) and there were three which I quite liked. So she took me to this gadget where I looked at this mirror thing, next thing it had taken a snap, and I could put my own back on and get a better idea of how they looked.

Couldn’t tell otherwise, as they just have clear glass lenses.

She asked me which I wanted, and that she’d hold them for me, (truth be told she probably had another dozen or more pairs, identical, tucked away), but that’s okay.

I then confessed that it didn’t matter what I liked, it is what the War Office liked; can you imagine  I  had to explain who, and what, the War Office is? I explained that the final choice would be my wifes, and that I would bring her down in the next day or two, and she’d give her seal of approval; or not!

A young man named Jimmy (I know that, as he had a thing saying “Jimmy” pinned to his collar)  probably around early 40’s came for me and led me off to start the tests.

Jimmy had an unusual accent, so I said where you come from Jimmy, (I thought it was somewhere in England) and he said South Carolina,and I said “your joking with me Jimmy” he said “no, that’s where I’m from,” and I replied ” you must have been here a hell of a long time, you don’t sound like a Southerner to me, did you come as a child?”

“No” says he ” I’ve only been here 7 years”.  “I’ve known blokes, been here 70 years (slight exaggeration)  still got their Yankee accents, Yanks don’t lose them”, then he squirted some stuff into my right eye, through this machine I was staring into, whilst all this yakking was going on.

“Well I moved around a lot living in the states, that might explain it” “No way” says me “you talk more like a Pom than I do, and I am one”, so he squirted this stuff into my other eye. he was a nice, cheerful bloke.

After he’d finished with me, he took me around to the optometrist proper, a young, dainty, lady, and,  like my Doctor Ping Nee, of Chinese heritage. She got to work on me and when she’s reached  her conclusions, told me that I had the start of cataracts, but that there was no need to be concerned.

At least that’s what I think she told me, didn’t have the War Office to relay the full message, I did get the bit about the glasses I’m wearing being pretty useless now, and I should have been tested some time ago.

We then discussed the lenses I’d be needing, well actually she told me the lenses I needed; and shortly thereafter I departed, and went off shopping.

Yesterday, being Sunday, I thought it would be a good idea for the War Office and me, to toddle along,  and  get her approval or otherwise on my choice of specs. and place the order. It takes a couple of weeks, from the time you order your specs, for them to do whatever they do to get the lenses made, and to set them.

What a surprise. First time I can recall, the War Office agreed with my choice after seeing them on.

There was nothing left to do, but to sit down with another technician, another young lady would you believe, Jasmine, (Jimmy must be the only bloke working there) and go through the use for each pair; and the right lenses for both. This took almost as long as the whole testing business did.

When all this was finalized, Jasmine told me the cost, so I paid up and the War Office and I left, she to do a little shopping, and me to wander back to the car, but not before asking me how much it was costing. I told her I’d wait until she was seated, before telling her. She then asked ” Out of my account, or your’s?” I replied “Mine”;  “Right!” says she and that’s the last mention of my new specs.

Now I have a small confession to make.

Over the last 40 + years, the War Office has been the official, and only,  judge of what I buy to wear; clothing or accessories; and I bow to her selection every time. She has not made one mistake that I can think of, that is why I did not select my new specs on Friday, without her seal of approval.

Now as a special treat and I don’t want you to get all excited, I’m going to show you the pics, that the first lady took of me trying on some of the glasses, 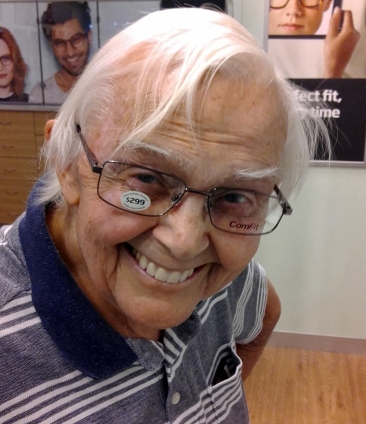 well they’re really the frames I suppose, just 3 pics and I bought two pair, out of the three. One pair is Pewter, one Horn rimmed and the third Gold, now if I were as cluey as disperser I’d run one of those ‘Poll; things and get opinions, but not knowing how, I haven’t, 😥