and his team relieved me of the stomach which had done some stirling service over the preceding 80 years and a couple of months.

The last little bit of info I received from him, was that he thought there was a possibility that the cancer had spread to my liver, so instead of going inside me from north to south, he was going to go from east to west, and if it had spread he’d just sow me back up and start me on chemo.

What a happy thought to be knocked out on. 😀

Well lucky for me, it hadn’t and everything went smoothly and I knew no more until several hours later when I came around in the, middle of a very large, very dark, very quite room, with one young lady sitting quietly at a console, monitoring what was going on.

No, I was not at the gates of heaven or hell, but in the Intensive Care Unit, where I was told to expect to spend the next two days, probably in excruciating pain. On seeing me come to, the nurse came to me and asked how I was feeling, and I told her fine.

She then asked me the question that I was to hear many times, each day, over the next several days; “On a scale of 1 to 10 with 10 being the highest how bad is the pain?” I told her about 1.25, and that it really wasn’t pain just discomfort. Anyway she made a note and then we had a chat for a while.

This went on for some time, until she was relieved and the process went on the same for the next several hours with me always saying that the pain was .75 or 2.33 recurring (being a complete idiot of course, but I wasn’t in any pain, like I was told I would be,so why not make light of my discomfort?).

Thankfully, they decided that I was not having them on, and that I really wasn’t in any pain per se, so they released me from the ICU and transferred me to W9-W2 to complete my treatment!

Just for the fun/hell of it I thought I’d add a few pictures taken whilst I was in W9 – W2, (perhaps I should have this reclassified “R” 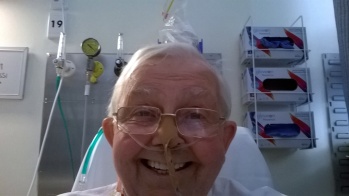 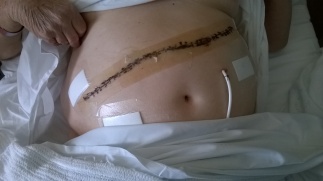 Pic 3 was just before those staples were removed, you can see  here the East West slicing and the abdomen still swollen to billyo; 😀 ;

Pic 4 these are some of the things that were plugged into, hanging off or attached to what was left of the cadaver. There were actually 3 of those big things with the canisters at the top. Don’t ask me what they were for, I have no idea.

By the bye; that thing stuck up my nose in pic 1, was feeding me. I had to go more than a week without food or water passing my lips; I did get grumpy on day 7. I might tell about that another time. 😉 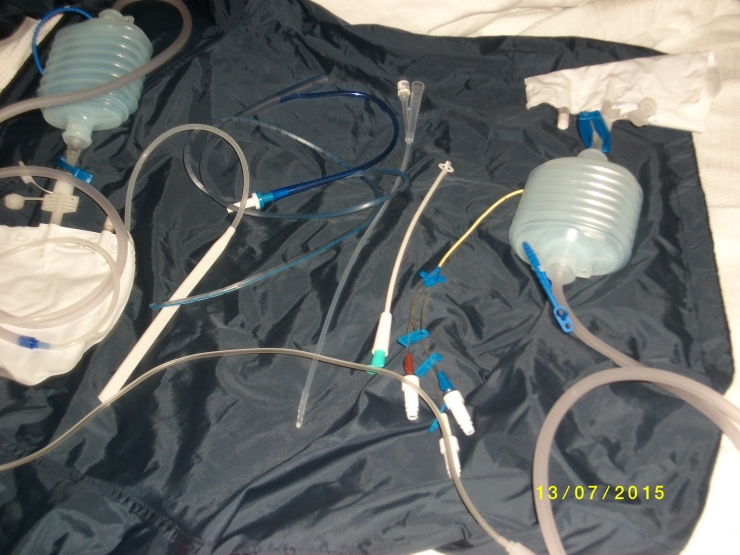 31 thoughts on “That year went quickly!”