Yes indeed, I had the feeling whilst writing the previous post that something wasn’t quite right and couldn’t put my finger on it, and, always the way, the answer woke me in the middle of the night. Well not quite, it was about 4 this morning.

Naturally, I resisted the temptation to get up and start hammering away at the keys, and just as naturally I couldn’t get back to sleep; consequently I’m exhausted but considered it would be a good idea to at least make a start; so here I am!         🐻 i

Those that actually read the post might recall that I mentioned a book my brother gave me for my birthday, ‘Yankee RN’, and I said it was on the first birthday I celebrated in Melbourne.

It was on the occasion of  my second birthday in Australia that he gave me the book. Now I hear you/y’all ask, how can he be so sure, when he was equally certain in the original post. Easy, everything dropped into place when I started to think about what happened immediately after receiving the gift, I’ll try and keep it short and sweet.

As soon as I received the book I headed for my bedroom, and this is how I know I made the boo boo!

I had the bedroom to myself; Sonny was doing his ‘National Service’ training in the RAN, at HMAS Cerberus, named after the three headed dog in Greek Mythology who guarded the underworld, and if you want to know why, have a look at a map of Victoria, and see where it is;  you’ll agree it’s aptly named. He gave it to me a few days after my birthday when he got a pass for the day and was able to get home for a few hours.

As I mentioned in the other post, at least I think I did, I could not put it down, I had never been so involved in a book. I literally laughed out loud in some chapters, and sobbed in others. Remember that this was almost seven years after the war in Europe ended, and the things written were still fresh in many memories, some events were inbedded in my memory.

I did not put the book down, I read it ’til I I could keep my eyes open no longer; grabbed a few minutes nap and carried on. By the Sunday afternoon, I had finished, read it completely and there was nothing left for me to do but to start all over again.

The book became an obsession I suppose, I don’t know how often or how many times I read it over the next few years, it’s of no great moment, but it did give me the incentive to start buying books, requesting books and collecting books. Pretty boring for most people, all history, mostly 20th century. It was some years before I ventured off into other realms.

On the 21st October 2005, I made my ‘pilgimage’ to Greenwich for what I hoped would be a celebration of the ‘Battle of Trafagar’ but the English, being English, had decided to hold the celebration a few months earlier, when they thought the weather would be fine, of course, I was completely unaware of this, however, no worries, I was able to wander around and see where Nelson had lain in state; he would have been in a fine state too, his body had been brought back to England, shoved into a cask of brandy to preserve it.

The Painted Hall where he lay was being prepared for a feast with Pince Andrew, Duke of York (a naval man himself) presiding. Just inside the entrance to the ‘Hall’ are two plaques to commemorate and honour those Americans, who risked all, to come to England, and join the Royal Navy to fight the Germans in WWII.

They were put there on the instructions of the Churchills grandson, also Winston, when he entered Parliament in 1970; something his grandpa should have done years earlier!. The pictures below are not the greatest, I haven’t got my buddy (he’s a Yank of sorts that’s why I used the b word) ej’s talent but you’ll get the idea of what the ‘Painted Hall’ looks like; and can see the list of those men who came to join the fight.

Commander Alex H. Cherry OBE RNVR was one of the first three. 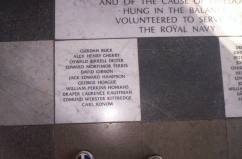