Some months ago I came across an article in the ‘Guardian’;  another of the worlds rags that I peruse regularly, and I was quite fascinated by it; one of the few who is probably.

It was titled ‘Bomb Sight – Mapping the WW2 census and entitled “Explore the London Blitz during 7th October 1940 to 6th June 1941. The big red and black blob represents all the bombs that Jerry dropped on us during that time. More pictures, closer and closer will be added.

This is another illustration of my contention that the people that inhabit these Isles are not “Brits”; as this illustration shows quite clearly, the English took the full brunt of the attack!

As you move in on the ‘blob’ naturally it gets bigger, until you get to the point where every bomb that landed on London and he surrounding counties is clearly shown; here’s an example:

are you getting the idea?

If you look to the right of the ‘blob’, you’ll see the town of Hornchurch clearly marked. Now Hornchurch believe it or not, had a Royal Air Force Station which was the home to several squadrons of Spitfires and as you can see, Jerry left it well alone and couldn’t be bothered dropping their bombs on it, preferring to drop them on defenseless things like shops, houses and people.

Now where we lived was just a bit to the left of Hornchurch, somewhere in the ‘blob’ so time to zoom in a bit closer; 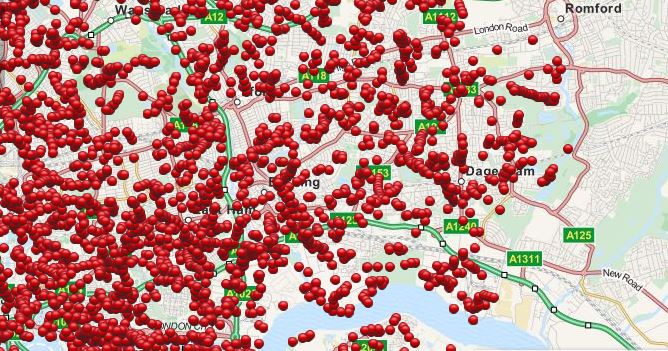 if you look closely above the A1311 thingy, you’ll see Dag****am, and to the left you may just discern the letters B****ng: these are the towns of Dagenham and Barking, where our house was, and you guessed it I’m about to go in a bit closer still!

Now slap bang in the middle of the pic you’ll see the street aptly named Langley Crescent, as you can see it is crescent shaped; and bi-secting it there is Gale Street, you may need to turn your head side on to see that, with a bomb next to the name. Our house was just to the right about 140/150 yards (we weren’t metric back then). Our house was about half way between the streets, Romsey Rd and Studley Rd. and that was the closest we came to being bombed out!

Just for the hell of it I decided to open up Google Earth and zoom in to the last of the thingo’s above and add some more useless information to the satelite view  to confuse and bore, all, or any of you, who’ve stayed this far. To answer the question I’m sure some may be thinking, yes I have got something better to do, but today I can’t be bothered!   😀

You’ll notice that I’ve stuck in some of those yellow ‘placemark’ things which Google so generously provide for my/our use at such times as this, so an explanation of sorts is called for!

55 Langley Crescent is where we lived and the other four are for the bombs/rockets which arrived unexpectedly. The only one that I can give the actual date of falling ( DB’s fell from the sky once their motor/rocket shut down) was DoodleBug1, this arrived on the 1st August 1944, my parents 13th wedding anniversary which they were celebrating with the birth of my sister Carole Ann

who is known far and wide, well amongst the family anyway as the Doodlebug Baby, for the simple reason that she was born just as the rocket exploded, and she was blessed with a reminder by way of a birth mark in the form of a German V1 rocket; a Doodlebug! (I did a post some time ago entitled;  https://lordbeariofbow.com/2014/09/23/the-doodlebug-baby-replies/ ); That’s her pic taken a few years ago!

Doodlebug 2 doesn’t evoke any pleasant memories; I recall it vividly still even if I can’t recall the date or day. It was around 8am and Sonny my brother had left for school, he had a fair way to travel under the circumstances of the day; and I was sitting atop of the trellis outside our back door, watching for any doodblebug that might be coming up the rive, Thames that is!; from my spot I could usually see them  first appearing beyween the chimneys on Bobby Ringe’s house and the house next to the Coster’s, don’t know their names as they didn’t have any kids! Anyway I spotted this bug coming and yelled “DOODLEBUG”, at the top of my lungs/voice whatever, nobody took much notice, we were becoming a bit blasé I suppose, unless of course the motor/rocket cut out, and on this morning it did.

http://www.bbc.com/news/magazine-20407283 this link is to a BBC recording of the ‘AirRaid Siren’ , the warning; followed by a ‘Doodlebug’ in flight, motor shut down and explosion of the bomb. Thought you might like  like to hear what they sounded like,   ❗

In a flash my mother with my baby sister tucked under her arm flashing through to the shelter, Bob my dog close at heel, I flew from my perch hit the ground running diving into the shelter. Usually a count of ten and then the BIG Bang followed; my mother and I were silent and then it came followed by the blast and the dust/smoke and christ only knows what else!

We knew it was close, we were hoping it had hit the school, at that time there wasn’t much chance of anybody being there, but it was not to be; The Doodlebug had struck in Langley Crescent, in the ‘Banjo’ just past Gale Street, and a direct hit upon an air-raid shelter; exactly the same as my mother, sister, dog and I were in. It was believed that there were eight people in the shelter when it struck!

The last placemark, V2 Rocket, deposited itself in the same field that DB1 had utilized back in August, I have no doubt it landed with an exceptionally loud explosion, trouble is I didn’t hear it and didn’t know until Sonny, my brother, Stanley, who we always called Sonny to differentiate from our dad, woke me and said to get up we’d been bombed! Well we hadn’t but we might just as well have been.

The blast had actually sucked our bedroom window OUT, frame and all, also the living room window below our bedroom suffered the same fate, sucked clean out. I haven’t any idea why they got sucked out and were not blasted in, just glad that they were. Had it the blasted in, I have no doubt my brother and I would have been killed, as it was it seemed all good fun and exitement at the time!

On a more sombre note….