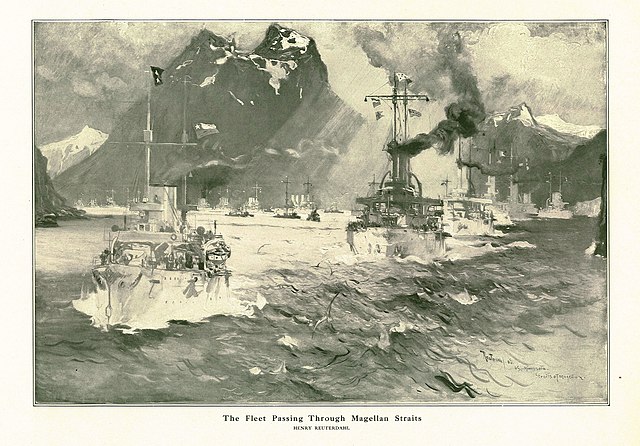 It does indeed represent the voyage of The Great White Fleet (hereinafter referred to as the ‘GWF’); for those that cheated and didn’t disclose their findings; thank you.       🙂

I’m not planning on giving an history lesson; says he to a collective sigh of relief, however I do have to give a brief account of the events surrounding the event for those unfamiliar with the ‘mission’, if I am going to explain what intrigues me; you may recall I did mention in the teaser post that I was intrigued by the GWF.

Back in 1907 POTUS aka President Theodore Roosevelt decided to flex a bit of muscle by sending a fleet of ships, battleships mainly, with a few support ships, to be precise, on a world tour.

Trouble was, I think, he didn’t have much of an idea on matters navy! He believed that the US Navy was a power to be reckoned with and he wanted the world to see that the US was emerging as a power on the high seas.

In 1907 the USN was to put it kindly second rate at best the oceans were dominated by the Royal Navy and the Imperial German Navy.

The RN had developed the ‘Dreadnought’ class of battleship in the late 19th century which had made the old ironclads obsolete. The German navy had immediately embarked on their own in what was the first major arms race. “Kaiser Bill” (Victoria, Queen of England’s eldest grandchild) wanted a navy  2/3rds the size of the RN.

The United States Atlantic Fleet was called up for service for the occasion, it’s ‘Flag Ship’ the USS Connecticut although only recently commissioned in 1906 was an ironclad and totally obsolete. Of the 16 Battleships four were of the ‘Connecticut’ Class, the remaining dozen were somewhat older ships dating 1901-1904.

There was around 40 support ships which were chartered, mostly from British sources as the USN did not have sufficient ships to service the fleet for any length of time.

On the 16th December ’07 the GWF departed Hampton Roads, Virginia, bound for Port of Spain, Trinidad thence down and around the tail end of South America through the Straits of Magellan and up to California, with a stopover in Peru. They couldn’t use the Panama as it wasn’t completed at that time.

A great time was had by all in California where the fleet holed up for a couple of months before the big event. On the 7th July the GWF up anchored and set sail for Hawai’i where they spent a week before heading south, below the Equator to Auckland, New Zealand where a tumultuous welcome was received by Yankees from these colonists from the outermost parts  of the then British Empire, the Kiwi’s even struck some sort of a medal to commemorate the occasion.

After Auckland it was Sydney’s turn, at the close of 1907 the population of New South Wales was a little over 1.5 million, around 850,000 were men. and of that number an estimate of over half a million turned out to welcome their American cousins.

To digress for just a moment, Sydney has had a long association with the United States going back to when it was first settled by the English in 1788 and it was found that commerce between the new colony and the United States was much easier and faster than with England. Too, Captain Cook had 3 Americans ( 2 officers and a seaman) in his ships company, I did some blogs on those blokes some time ago.

So you can see that a jolly old time was had in Sydney before the GWF set off for Melbourne down in Victoria where once again the received a tumultuous reception, and considering Melbourne is the most English of Australian cities when it all boils down it seems somewhat surprising.

From Melbourne, across the Great Australian Bite to Albany in Western Australia, the only seaport in the West that could accommodate a fleet of this size, Albany was not much more than a village with a population of a couple of thousand. So I don’t expect that the 14 thousand or so officers and men, had much of  a time there.

On leaving Albany the fleet turned to starboard and headed back up north on course for Manila in the Philippines, Japan and China. Japan had recently signed a treaty/pact with Great Britain which was a bit of a worry to the US government so a show of the ‘flag’ was a must do, and was done in Yokohama not Tokyo.

The fleet had split into separate squadrons for these stages and joined forces again at the end of October ’08 in Manila and continued onto the final stages of their voyage; setting sail for Colombo, Ceylon on the 1st December ’08 and arriving there on the 13th. A weeks stay then off again setting course for Egypt and the Suez. This link will take you to some actual photographs taken by crewmen whilst passing through the Suez; 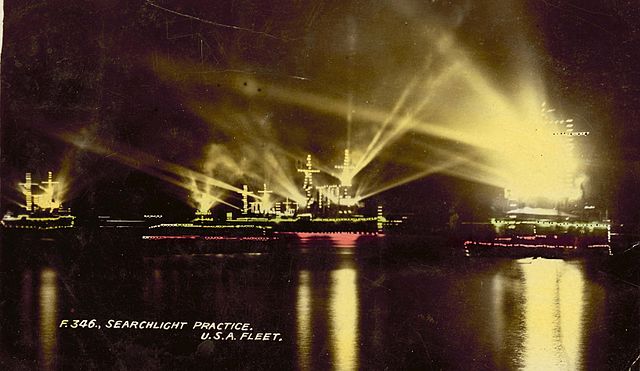 just a little aside to brighten up your lives and this post, this was searchlight practice in Sydney Harbour by the GWF.

While in Egypt an earthquake struck Sicily and as a goodwill gesture the Navy/US Government detached 4 ships of the fleet, led by the Flagship Connecticut to assist in the rescue operations. The crew of the “Illinois” recovered the bodies of the US consul and his wife that were buried in the ruins.

On regrouping the GWF headed west to Gibraltar at  that time home to the Royal Navy’s Mediterranean Fleet. arriving there on the 31st January/1st February 1909, and staying until the 6th.

And then they did something I find completely incongruous and what intrigues and amazes me completely.

On setting sail from Gibraltar the GWT high tailed it across, what I imagine must have been a raging Atlantic Ocean, for Hampton Roads, Vermont, where they received a heroic welcome from President Roosevelt and thousands of cheering countrymen and women.

What intrigues me is why! Why did they head across the Atlantic? Why on leaving Gibraltar did the Commander in chief not order “Right full rudder”?

I believe I know why!

But it will have to wait for a seperate post/log/essay this has gone on long enough!

I had written a post on this subject and when I attached the photograph which heads this post, it blew the lot into cyberspace whatever/ whereever. the picture is of a painting by the GWT ‘s official artist Henry Reuterdahl who was sailing aboard the supply ship the USS Culgoa. The original (or a damned fine copy hangs aboard the USS New Jersey, moored at Camden NJ.

18 thoughts on “It wasn’t the “Flight of the Bumblebee””