I have the feeling that I may have touched on my time in the ‘National Service‘ (Nasho’s) in a previous post but I won’t dwell on that here.

After completing what was termed ‘three months basic training’ that is learning to march properly, salute the officer’s properly; learning how to ‘Brasso‘ my buckles and bows, shine my boots properly, how to fire a Lee Enfield (made in 1917) .303 rifle, Owen gun Bren gun, I was assigned to a tank as the gunner.

This was quite logical as I had failed to pass the rifle course; I recall my sergeant; a Sgt W. Smith a WWII veteran with the top of one of his  fingers missing, shaking his head after sending me through the rifle range 4 or 5 times during the course of the day and telling me at the end  “Smith, you couldn’t hit a bull in the arse with a handful of hay!”

He was right of course I was useless when it came to rifles. Perhaps I should have kept my eyes open when pulling (not squeezing) the trigger

However I turned out to be a dab hand when it came to the 37mm gun on the ‘Grant’ tank, must have taken after my dad when it came to a proper gun. He was on the Ack-Ack guns as a layer during the war and a dead eye from all accounts.

The ‘Grants’ after WWII were allocated to the 2nd Armoured Brigade based in Victoria and I was to serve out my time in the ‘Nasho’s’ with the 4th/19th Prince of Wales’s Light Horse Regiment.

Undoubtedly it you have stayed this far you are all probably wondering by now what this has got to do with my first motor car.

Well the answer is quite simple, money! Whilst I was doing my time I had very little to spend my pay on; during training we were not allowed to imbibe in alcoholic beverages the only expense was tobacco. Being a fair dinkum dinkie di digger I rolled my own smokes whilst serving in the Army.

When I got called up I decided that I’d live on the bare minimum to sustain life and get a nice lump sum when the basic training finished and with the make up in wages that my employer the ‘Royal Insurance Co. Ltd.’  were to pay when  I returned I’d have more than enough to put down a reasonable  deposit on a car, which is what happened.

Once I settled back into my normal life I started looking for my car. I eventually saw what I wanted, a Singer Sports for sale at R.H. Hall & Sons, St. Kilda, well within my budget and with my mate Doyly (Bryan Francis Doyle) went over to St. Kilda to take a look.

It was just what I wanted, just the thing for a young bloke: this isn’t the car we looked at but is the same type and colour. I had plenty of money for the deposit and the payments over two years wouldn’t have been any hardship.

All I had to do now was go get my dad to come over and sign up as guarantor for me. This was in December 1953 and I was 18 going on 19, just done time in the Army, allowed into the pubs for a drink but not old enough to vote or buy a car without a guarantor.

So Doyly and I went back over to Sunshine and got my dad and back we all went to St. Kilda. Me with cash burning a hole in my pocket going to buy the car of my dreams.

When we got there my dad saw my dream and shook his head, no I can’t have that he wouldn’t go as guarantor on a sports car. Crestfallen and down we started going around the other cars there and a Vauxhall 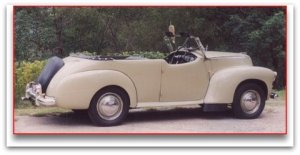 took my eye, a soft top as we call them these days, very similar to the one in the picture, but the model before.

Would you believe it my dad said ‘No!’ again. Like me my dad had absolutely no idea about cars how they worked or what made them go, it was just on eye appeal.

Anyway we kept looking around, what I should have done was packed it in and gone home and tried again later, but I was young and impatient and had waited for months to get out of the Army get back to the Royal get my money and buy my first car.

Then a car caught my dads eye, and like it or lump it; this was the car for me an English saloon, what my Australian mates would call a “silly bloody Pommy sedan” Still that didn’t make any difference to my dad it was a proper car to his way of thinking, no soft top/convertible, but a sensible car that would last me; and if I wanted that one he would sign the guarantee.

What choice did I get or have?

This isn’t it; but it is identical, except for the door rear view mirrors of which the one I was about to buy was bereft.

My dad really was set on this vehicle a 1939 Morris Ten Saloon, so he asked the salesman “How much” the salesman said “£235.0.0”, my dad told me that that was a good price for such a good car, how he knew is beyond me, we hadn’t even started the motor to see if it would go, and what price the salesman would have taken we’ll never know.

I was told I could have it on £90. deposit and £2. a week for two years, this was well under what I’d been expecting so I looked once more at my shiny red Singer and said goodbye and signed up for a 1939 Morris Ten. As I was paid fortnightly it was agreed that I’d call in every two weeks and pay my £4. in cash. I never missed a payment, I was there promptly every two weeks with my 4 quid even when the car was laid up and I’d have to travel by bus and tram to get to St. Kilda.

If you look carefully at the front of the car at the bottom of the grill you’ll see a little round hole. This was for the crank handle, used to start the car if the battery was flat. Naturally the crank handle was lost but that didn’t deter my dad; he just set to and made me a new one. Handy having a ‘Blacksmith’ in the family and my dad was the best you’d ever see, believe me I know I worked with him for a couple of weeks before getting fired and he was a joy to watch with a hunk of white hot iron, a hammer and his anvil.

The car wasn’t equipped with a heater, on a cold day you’d get rugged up. On a hot day to cool down there was the air-conditioning. Just above  the dashboard was the a/c handle by turning it clockwise it wound the windscreeen out and you’d get a nice hot breeze come into the car; great fun.

Well there you have it; my first motor car a 1939 Morris Ten Saloon.

4 thoughts on “My first motor car”