The other day I received an e-mail from my Dopey Daughter who is currently on a work/study thing in Malawi which is somewhere in deepest, darkest Africa, doesn’t that expression get a hammering? I should know better than to use it; however, to get back to the e-mail, it was quite odd but considering the source one should not be surprised.

Just read a Hagar the Horrible cartoon in the Malawi Daily Times. Funny

Now this came to me from out of the blue or cyber space if you prefer and I could not help wondering why she sent me an e-mail telling me that she’d read a comic strip. What the dickens it had to do with the Emma post was quite beyond me.

Anyway to humour her I wrote back telling her that I was rather fond of Hagar myself, and also The Wizard of Id. I went on and told her about comic strips and cartoonists from my early years and she said it would probably make a good blog or words to that effect.

As a lad I enjoyed comic books during and just after the war (thats WWII not I) I used to read comics like ‘Beano’ (which might still be going in England) ‘Dandy’, ‘Film Fun’, I think there may have been one called ‘Comic Cuts’ and of course ‘Hotspur’ and a few others, their names escaping me for the present.

After the war we began to get American comics, foremost of course was ‘Superman’ and I became an ardent follower of his escapades. The English comics were more for fun and enjoyment and the American for superheroes.

Comics were for swapping, there were that many that to buy them all was beyond my means, I received no more than a half a crown a week in pocket money, which had to be earned; so swapping my ‘Beano’ for a “Dandy’ then a “Hotspur’ and so on ’til every comic old or new became an item of trade. By holding off on a swap and building up a small collection allowed you to swap for bigger things.

The American comics were much bigger and to swap for a ‘Superman’ you’d need at least 2 ‘Beano’s’  or a combination of smaller English comics to get the much larger Yankee ones. Anyway over a period of time I got to see and read most of the comics that interested me.

I either had my head burrowed in a book or a comic and it wasn’t unusual for my mother to give me a ‘clip around the ear’ telling me to take my head out of the comic as she had something else for me to do, I think it used to annoy her my reading the ‘Beano’ and having a chuckle at “Billy Bunter” et al, she’d tell me to stop acting like my father and do something useful.

When I think about it my mother didn’t have much of a sense of humour. Not like my Dad.

My dad liked the newspapers, he also loved the cartoons, (probably where I got it from) and he had one particular favourite and I’ll try not to bore you too much.

After we’d finish tea ( back then we had breakfast dinner & tea) and Sonny or I had washed up; we used to take turn about; my father would settle down in his chair and start on the papers. He didn’t have time in the mornings so he’d do all his reading after tea.

His morning paper was the ‘Daily Mirror’ ( this is long before Rupert Murdock got his grubby hands on it) and he would start on that one. After a while I would sit and watch him and wait for the inevitable; the pages would stop turning and after a few minutes his stomach would start to shake and before long he was shaking all over and never a sound escaped his lips, sometimes there were some tears in his eyes or rolling down his cheeks.

He would be laughing uncontrollably, just sitting there laughing and shaking; my mother would shake her head and call him a “silly sod” and go on with her knitting, she was a great knitter!

I found out that he was laughing at a cartoon character “Useless Eustace” ; now “UE” had been around for ever (Winston S Churchill was another devotee of “Useless” and never missed a cartoon) some days there was text other days none; on the no text days you could expect to see my father being a “silly sod” Those without text were ten times funnier as I was to learn. 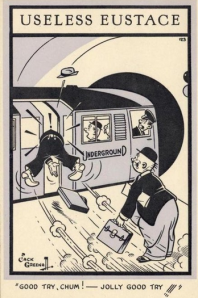 It didn’t take me long to become a cartoon nut; I mentioned in a previous blog how I’d started reading the Daily Mail on the train each morning, Now the Mail had two brilliant cartoonists Wimsey & Styx; like the UE cartoons they produced just the one drawing and likewise they came with or without text and the result was the same  the non-text always the best.

What I didn’t know at the time was that Wimsey & Styx were pseudonyms and were actually  done by Leslie Harding who also drew cartoons under his real name; now how brilliant was he? There was a slight similarity with his Styx & Wimsey drawings and styles but not really enough to suggest they were drawn by the same artist.

Perhaps the finest of all cartoonists in my not so humble opinion (I see no need to be humble 🙂 was Paul Rigby a West Australian, I can’t remember when I first discovered Rigby but he was superb; without parallel. Like many others in Australia I could not go without my daily fix of Rigby and to join the hunt for his “urchin & dog” the two trade mark characters embedded somewhere deep inside his cartoon.

There is or was an hotel in Perth WA, The Ocean Beach Hotel a favourite watering hole for Rigby, and he produced  a great mural in the main bar depicting a beach scene at Ocean Beach and every character in the mural had the face of one of the hotels regular customers; and somewhere hidden in this mural was the urchin & dog.